What's that? It's my Birthday! 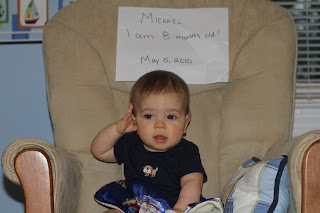 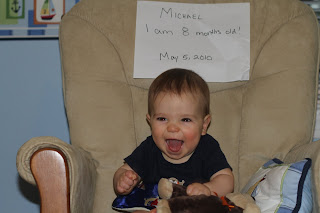 I totally stole this idea from a friend. She's been making signs like that to document all the major milestones for her daughter. I wish we'd started sooner, but he's young enough that it'll still be cute I think. 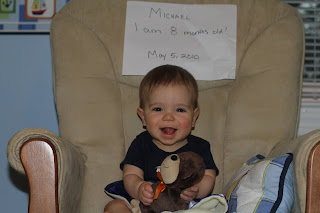 Of course, Michael was much more interested in trying to eat the sign. He's a big fan of trying to eat everything he can reach these days. 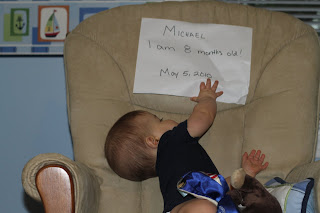 Here are a few other photos just documenting how adorable we think he is at 8 months. :) 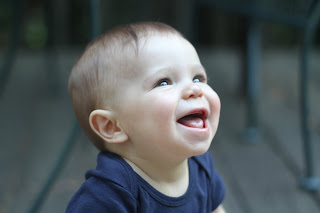 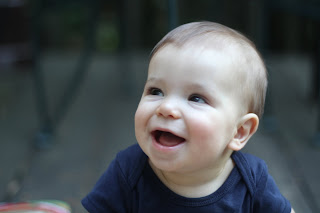 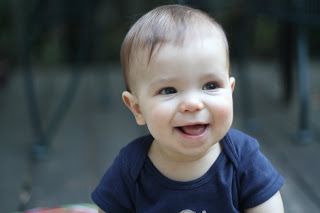 He is now crawling all over the place. He's getting pretty fast! He can push himself up into a sitting position from a crawl. He can pull himself up to a standing position while holding onto furniture, but he can't sit himself back down. He's not quite "traveling" yet, but I don't think it will be much longer. We made a good start at babyproofing our house this weekend. By that, I mean that we put up some baby gates to at least limit where he can explore. We still can't take our eyes off him for a nano-second or he'll get into something. He eats babyfood like a champ, and he's learning to do finger food. He loves cheerios and string cheese and sometimes toast, but he is NOT a fan of avocado. He "talks" to us more and more. He drools all the time and gnaws on everything, but no teeth yet. I look forward to what this next month will bring!

Katie
Georgia
Wife of one, mother of three, prayerfully raising my children to walk in God's abundant grace, and eagerly waiting to see when, where, and how God will use me next to encourage and build up his children in love!